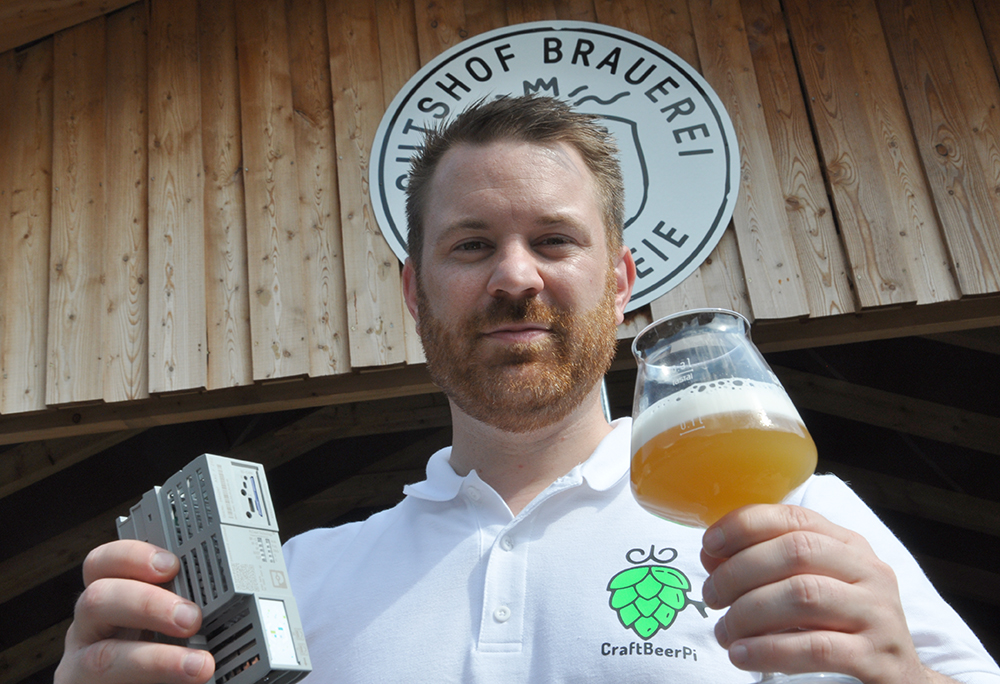 Craft Beer is trending. More and more small gastro and home breweries are being founded worldwide.  The aim is to revive the traditional beer market with new and innovative creations, by consciously distinguishing oneself from the global mainstream. Intensively hopped beers with unique tastes are created. Many of these recipes are developed and optimized by hand. Ultimately, after achieving a satisfactory result, the aim is to make the recipe as easy to reproduce as possible. Then there is no getting around the topic of automation.

In order to automate the brewing process for small hobby and gastro-breweries, the community project CraftBeerPi was created in 2015. CraftBeerPi is an application programmed in the high-level language of Python to control the brewing and fermentation process. CraftBeerPi was initially developed for the Raspberry Pi. Heating elements, agitators, valves, and various temperature and pressure sensors can be controlled with the software. The unique feature of the CraftBeerPi software is its “openness” coupled with a global community that actively promotes further development.

In the Facebook community alone, more than 6000 hobby brewers as well as professional brew masters from 76 countries exchange views on the topic of CraftbeerPi. These users all have one thing in common: to optimize the brewing process by incorporating automation into the traditional approach. With the PLCnext Technology Ecosystem, the Raspberry Pi solution was converted into an industry scale controller. In other words: how the brewing in grandma’s cooking pot has progressed into a success story and has now been developed to industry standards.

From grandma’s stew pot to brewing to industry standards

In 2019, the estate brewery “Das Freie” near Hanover expressed the desire for further professionalization of the brewery control system. Currently they produce 500 hectoliters of beer per year. Until now a Raspberry Pi with a CraftbeerPi software was sufficient for their production.  However, the demand has increased. So in order to maintain quality standards and to be well positioned for future plant expansions, they realized there was a need for an optimized and scalable solution. This is where PLCnext Technology can help.

PLCnext Technology gave the brewers three main advantages: maintaining the ease of use of the software, increasing reliability with a help of a robust hardware, and easy expansion for the future.

Let’s have a look at what the PLCnext Control actually does. The challenge with brewing is to get the beer reliably to different temperature levels. During the heating and cooling phases, any temperature fluctuation or variation in the agitation speed affects the chemical processes and thus the quality and taste of the beer. The mash is heated in several stages. The controller reads the data from the temperature sensors, controls the heating process, and stirs the mash continuously to maintain uniform temperature throughout. The REST interface was used for communication with the local bus and the whole project was taken to a new level. It now allows the use of industrial components, bus systems like Profinet and our Axioline local bus.

The brewers no longer have to be at the plant at four o’clock in the morning and put it into operation. In addition, the processes can be monitored and controlled via an app on the smartphone. This can be accomplished from the comfort of your home or remotely from any desired location anywhere in the world. That is not only more convenient for employees, but also saves a lot of time: currently about one working day a month.

Changing from a Raspberry Pi, machine learning and AI

No matter whether an industrial controller or a Raspberry Pi, the software solution remains unchanged. The Python-based CraftBeerPi application was ported to the PLCnext Control at lightning speed. Plug & Play, so to speak. In fact, according to Manuel Fritsch who is the founder of CraftbeerPi, it only took the time needed to have a beer and a slice of pizza.

But PLCnext Technology has not only taken care of the processes that are already running. Based on the PLCnext Control, the estate brewery will be able to optimize and creatively expand their brewing process in the future, eg. In the areas of machine learning and artificial intelligence. If it is possible to optimize the fermentation control AI in a few years, the owners have the big vision of making beer even better all over the world. And additionally, to make it available at a lower price through artificial intelligence in fermentation control.

The PLCnext Control makes it possible for the estate brewery to switch from a Raspberry PI solution to an industry-compatible controller without programming effort, thereby making the processes more efficient in the long term and making their plant more reliable. In this context, the industrial suitability as well as the possibility of connecting to numerous products in the Phoenix Contact Product portfolio have been important arguments for the PLCnext Control.

Start to discover the endless possibilities. CraftBeerPi, which was originally programmed to optimize the beer brewing process, has found further applications in cheese production and distilleries. Thanks to the CraftBeerPi community with a lot of creativity and inventiveness, further developments and process improvements will be usable in the future – no matter if a Raspberry Pi or a PLCnext Control is used. PLCnext Technology’s open platform makes it easy to use the Craftbeer PI solution programmed in a high-level language.